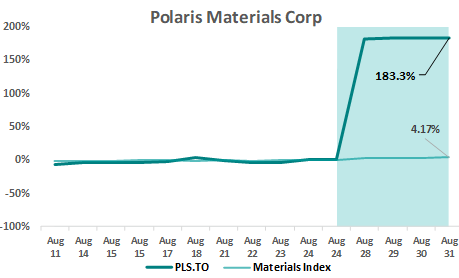 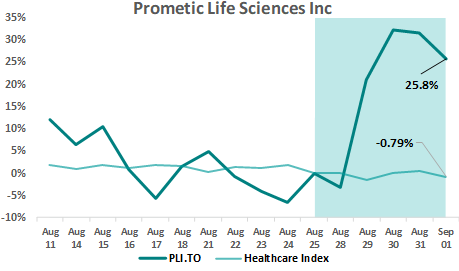 On August 29, 2017 PLI announced that the U.S Food and Drug Administration (FDA) has granted a “Rare Pediatric Disease Designation” to its Ryplazim, a plasminogen replacement therapy for the treatment of patients with congenital plasminogen deficiency. 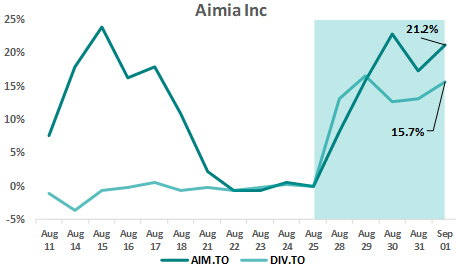 AIM has completed the first of its non-core asset divestitures since Air Canada non-renewal news (Air Canada will stop using AIMIA’s Aeroplan as its loyalty rewards administrator) with the sale of the Air Miles trademarks for Canada to Diversified Royalty Corp (DIV).

AIM transferred the trademark, license and royalty agreements for Canada for cash consideration of $53.7mm, with up to $13.75mm in additional performance-related payments over the next three years. AIM is expected to pay cash tax on the sale between $13-16mm. In exchange, AIM is giving up $8.5mm in annual license fee revenue from LoyaltyOne (the owner and operator of Air Miles in Canada), a subsidiary of Alliance Data System.

AIM’s effort to simplify its business while raising cash (via divestiture) to defend a potential rewards redemption run is being rewarded by the market. 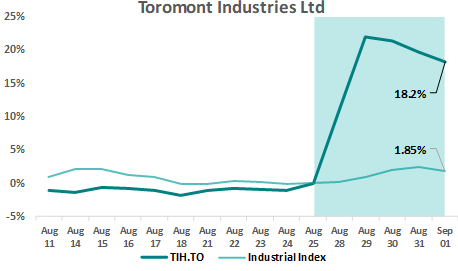 TIH had a very clean balance sheet at 0.1x Net Debt/LTM EBITDA, and with plenty of private CAT dealers in Canada, the market expected TIH to put its balance sheet strength to good use. On August 28, 2017, TIH announced that it was acquiring Hewitt, a Quebec-based Caterpillar dealer, for $917.7mm in cash and 2.25mm TIH shares (total consideration sums to $1.02bn but higher now with the stock rising).

The acquisition is a classic example of “bigger publicly-traded acquirer buying smaller-private-less operationally-efficient target”. Hewitt generated $1.0bn in revenue and $66.4mm in operating profit. TIH’s EBIT margin averages about 12% for the past three years.

With acquisition like this, the market generally believes that the target’s margin will improve. Hewitt also gives TIH access to Quebec, Western Labrador and the Maritimes. So overall, the market feels that this is a very positive development for TIH. 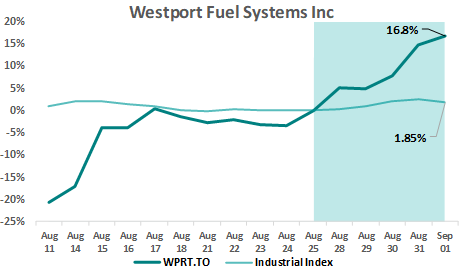 As previously discussed in this weekly feature, with the combination of a $28.7mm equity raise and non-core asset divestitures of $70mm, WPRT has liquidity to pay down its 9% junior debenture due on September 15. On August 29, WPRT announced that it expects to repay the remainder of the debentures on their original maturity date, removing all short-term liquidity concerns. The market is waking up to the fact. 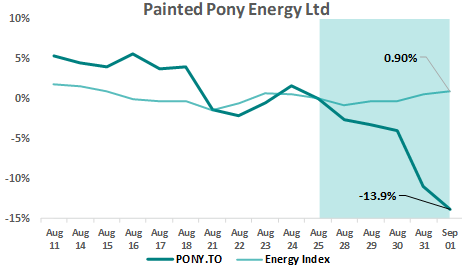 At first, the stock reaction looks counterintuitive – in a DCF framework, reducing capex means higher FCFF and should increase the EV. However, for resource extraction business like E&P and mining, top-line growth is directly tied to its capex program.

In fact, E&P companies need to constantly spend capex just to keep its production level stable due to the natural production decline. Therefore, reducing capex generally reduces the NAV of a resource extraction company and the stock reaction is rational. 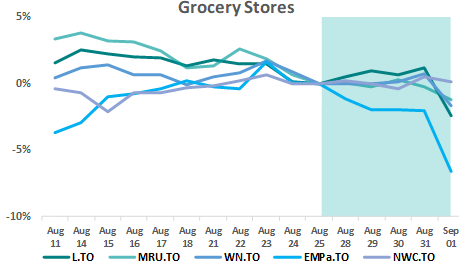 With the Whole Foods acquisition, Amazon is aiming to disrupt the grocery shopping business. On the first day as the owner of Whole Foods, Amazon cut prices on a number of organic goods at locations across Canada and the U.S. On Friday, WSJ reported that Amazon will pilot a grocery-delivery system in Toronto and Vancouver later this year and expand to other Canadian cities throughout 2018.

This development is negative to the Canadian grocery stocks as they risk losing market share to Amazon if they do nothing, or they will have to spend a lot of money to develop and establish their online presence, which is close to non-existence at the moment.