Cloud computing is the provision of internet services through the internet (the “cloud”). This includes databases, storage, software, and servers.

Most businesses that use computers will eventually move to the cloud due to the advantages from a cost and flexibility perspective.

As an example, instead of a server with a dedicated room in the office, servers are provided through the cloud, so the physical footprint for companies is reduced and all that is needed is an internet connection where they will be protected by advanced security measures. The company will not need to maintain their server or worry about security – this is not their core competency and they will be in much better hands with Azure (Microsoft) or Amazon Web Services.

For the individual, whether they are using Spotify, Uber or Netflix, they are on the cloud.

Infrastructure as a Service (IaaS)

IaaS is self explanatory – servers, virtual machines (VM), emulators (for instance, the Virtual Boy Advance software emulated a Game Boy Advance handheld console so that it could be used on a computer) and storage are included are what would be physical infrastructure that are provided through the cloud. There has been a steady evolution of data storage, moving from thousands of documents in paper form to an internal database hosted by an on-site server to secure web server thousands of miles away accessed via a low latency internet connection.

With IaaS, customers are renting the IT infrastructure but will conduct their own day to day activities and use their own software or other third-party software. For instance, Fidelity may host their data on a cloud server but will run their own proprietary risk management models.

IaaS has a pay-as-you-go business model which allows for flexibility on usage and growth. As a company uses more server space, it will pay the provider more money. Sell Side Handbook has a web host based in Europe instead of having its own server. This allows Sell Side Handbook to focus on the publication of content with a 24h support system should there be any IT related difficulties.

Dominant players in cloud services are Amazon Web Services, Microsoft Azure, IBM Cloud, Google Cloud Platform and Alibaba Cloud. Amazon is the largest cloud provider by revenue at the moment but Alibaba’s growth rate and competitive moat in China, where it is the runaway number one, is worth noticing. 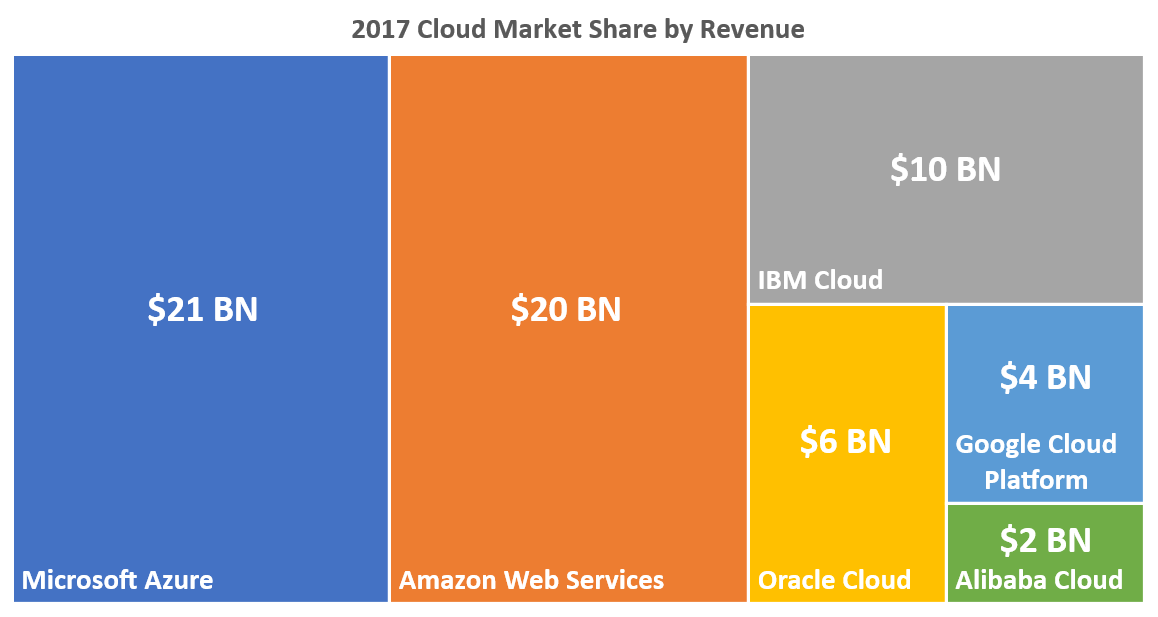 Platform as a Service (PaaS)

PaaS is the provision of a platform on which to build applications (apps) on over the cloud. PaaS will be in addition to IaaS, as the cloud provider will also provide the infrastructure to access the platform.

If a customer finds a platform that supports the programming languages they want to develop on, the cloud provider will take care of the infrastructure (servers, storage) while providing support for app building. Many common functions can be pre-coded, so it is a lot easier than starting from scratch. Again, the focus is to let companies focus on their core competency.

A banking example would be the use of Visual Basic for Applications (VBA), Microsoft Office’s programming language, to build macros that are used to automate processes in Excel and PowerPoint. Office has a built-in developer function – likewise, the cloud provider will provide the platform on which to work with.

Major PaaS companies include the aforementioned players as well as Red Hat OpenShift, Heroku (owned by Salesforce), and AppFog (owned by CenturyLink).

Providers may charge money via hourly pay-as-you-go or by subscription plus usage fees or just usage fees.

Software as a Service (SaaS)

SaaS is a major technology buzzword that elicits confusion but is actually very simple. SaaS is simply connecting to apps via the internet/cloud. If you use Gmail, you are using SaaS.

The software and storage are with Google, but the consumer accesses it via the web.

SaaS has been transformative both for individuals (Gmail) and businesses/institutions. SaaS applications are used for functions including Customer Relationship Management (CRM) and Enterprise Resource Planning (ERP).

SaaS and Disintermediation Through Technology

As the simplest example, we can look at ridesharing app Uber, which touts itself as software as a service while taxi drivers argue in courts that it is SaaS masquerading as a taxi service and illegally depriving noble cab drivers of their livelihood.

Ignoring that, look at supply and demand before Uber. The demand curve is what it is – people who want to visit their friends but are unwilling to pay $20 for a short distance in poor weather and face the uncertainty and possible discomfort owing to customer service from a cab will stay at home. The supply curve is constrained by the number of taxi licenses or medallions granted by the city licensing body.

Uber liberalizes the supply curve and brings in an influx of drivers, from full time drivers with vehicles that are otherwise idle, part time drivers that drive at leisure and drivers who may even rent a car to drive and make additional income. Now people who would otherwise not have gone out are going out and places that were inaccessible, especially in cities with poor public transit such as Toronto or Los Angeles are far more vibrant and commercial. Uber has a multiplier effect on consumer spending which feeds back into Uber. Consumer and producer surplus both increase and Uber takes a transaction fee from every ride, contributing to its 50 billion dollar valuation today.

Looking at many of the major technology companies that millennials enjoy today, it is interesting to consider that Uber, Airbnb, Netflix, Classpass and Foodora are not responsible for any major technological innovation. None of them wrote groundbreaking algorithms that redefined search like Google or introduced the internet across homes. They just optimized antiquated business models in an increasingly urban society and made things easier to access while suppliers of goods have sacrificed a little bit of price for a large quantity of volume.

Unlike the structural dominance of Google’s search or Microsoft Office, the aforementioned apps do not have the same business moat and are kept honest from monopoly power by competition. Take food delivery for example – Deliveroo, UberEATS, Foodora and FoodPanda all service the same market. Accordingly, they are forced to compete on reliability (food has to arrive), speed (quickly), variety (popular restaurants) and quality control (food has to be hot, restaurant partners have to be top notch). As such, their engineers must continuously optimize routes while their customer service teams have to be attentive. In competing for share, they may have to fight with commission rebates for high volume restaurants.