The British thermal unit (Btu) is the amount of heat required to raise the temperature of one pound of water by one-degree Fahrenheit. As such, gas will usually be priced per one million Btus or MMBtu. In Canada, gas is priced per GJ or gigajoule.

A GJ or MMBtu is roughly energy equivalent to 1,000 cubic feet of natural gas. For exercises that require precision, the calculation is actually 1,037 cubic feet, and the GJ conversion escapes me.

Henry Hub is a distribution hub at the natural gas pipeline system in Erath, Louisiana. It is both the pricing and delivery point for natural gas futures traded on the NYMEX. The settlement prices at Henry Hub are used as benchmarks for the entire North American natural gas market and is traded in USD per million British thermal units (mmbtu).

All other natural gas benchmarks are priced at a differential to Henry Hub. The influence of Henry Hub on pricing is based on actual supply and demand of natural gas as a stand-alone commodity.

Other natural gas markets may have fragmented hub pricing points which means the prices are somewhat indexed to crude oil which has a wide array of other factors affecting its price.

National Balancing Point (NBP) is UK’s virtual trading location and exchange of natural gas. It is the pricing and delivery point for intercontinental natural gas futures and the second most liquid gas trading point in Europe.

NBP has major influence on what domestic consumers pay for gas at home and is quoted in price per therm (100,000 btu). Any gas in the country within the national transmission system counts as NBP gas. As NBP is a virtual trading location, it is not serviced by any pipelines.

West Coast Station 2 is a physical natural gas trading point located near Chetwynd, British Columbia and it’s the main aggregation point of natural gas supply from the Northeastern part of BC. At this point, the natural gas can either travel South down the Spectra Energy Mainline or East into Alberta from the Alliance Pipeline. Station 2 prices are quoted in CAD/GJ.

Alberta Energy Company (AECO), located in Alberta, Canada, is one of the largest natural gas distribution hubs in North America. It’s the most widely used Canadian benchmark for natural gas and it’s quoted in CAD/gigajoules (GJ).

Through the hub’s network of pipelines, gas is gathered from inside and outside of Alberta and is then transported through numerous transmission lines to many high-demand markets. The TransCanada Mainline is Canada’s main inter-provincial pipeline that extends from Eastern Alberta to Montreal. Other exporting pipelines connect Alberta with markets across the US. AECO also has a large amount of storage capacity, which aids in the functioning of the hub. AECO is serviced by TransCanada Nova Gas Transmission Pipeline, Express Pipeline.

Empress Alberta is a natural gas distribution hub located on the border of Empress, Alberta and McNeill, Saskatchewan with units of natural gas quoted in CAD/GJ.

Empress also acts as a liquids recovery plant before sending in-province gas out of province. There are two reasons why Empress sits on the border: political and infrastructural. Politically, Alberta wanted value to be added inside provincial borders, and infrastructurally, it made sense to extract liquids before exporting dry gas. Serviced by Nova Gas Transmission Line, TransCanada Mainline

Dawn Ontario is one of North American’s most liquid natural gas trading hubs. It’s strategically located in Southwestern Ontario, providing direct access to North America’s major supply basins. With multiple supply routes from Western Canada, mid-continent, the Rockies, and the Gulf of Mexico, Dawn has the ability to serve markets in the mid-west, Eastern Canada, and Northeast US. Although this is a Canadian hub, prices at Dawn are quoted in USD/mmbtu.

This is a fairly unique pipeline system because natural gas liquids may be left in the gas stream. Consists of 3,848 km integrated Canadian and US natural gas pipeline system delivering natural gas from Western Canada to Chicago market hub. Alliance has a Canadian portion and US portion that represent separate companies and the entire entity is co-owned by Enbridge and Veresen (now part of Pembina Pipeline).

The system has been in service since 2000 and delivers an average of 1.63 bcf/day with a capacity of 1.6 bcf/d and 1.8 bcf/d in summer and winter respectively.

Foothills British Columbia has a throughput rate of 1.9 bcf/d and a capacity of 2.9 bcf/d and 3 bcf/d in the summer and winter respectively.

Foothills Saskatchewan has a throughput rate of 1.4 bcf/d and 2.2 bcf/d and 2.3 bcf/d in summer and winter respectively.

Extends from Goldboro, Nova Scotia, through New Brunswick to a point on the Canada-US border net St. Stephen, New Brunswick.

Maritimes & Northeast pipeline system has a throughput rate of 0.25 bcf/d and capacity of 0.56 bcf/d.

Consists of more than 25,000 km of natural gas pipelines in Alberta and British Columbia. This pipeline is wholly owned by the TransCanada Corporation. The pipeline is divided into three segments: Upstream James River, North and East Flows, and Eastern Gate.

Upstream James River has a throughput rate of 7.8 bcf/d and a capacity of 8.9 bcf/d.

North and East Flows has a throughput rate of 3.1 bcf/d and a capacity of 3.9bcf/d and 5.0 bcf/d in summer and winter respectively.

Prairies has a throughput rate of 3 bcf/d and capacity of 6.6 bcf/d to 7.1 bcf/d in summer and winter respectively.

Estern Triangle has a throughput rate of 2.4 bcf/d and capacity of 4.9 bcf/d and 5.7 bcf/d in summer and winter respectively.

Consists of 572 km pipeline system which extends throughout Quebec. Natural gas is transported to the US Northeast market. The pipeline has a throughput rate of 0.5 bcf/d and capacity of 0.8 bcf/d.

Extends from points in Yukon, Northwest Territories, Alberta, and British Columbia to the Canada-US border. It then connects to the Williams Northwest Pipeline which then supplies natural gas to the US. This system is divided into two segments: T-North and T-South. 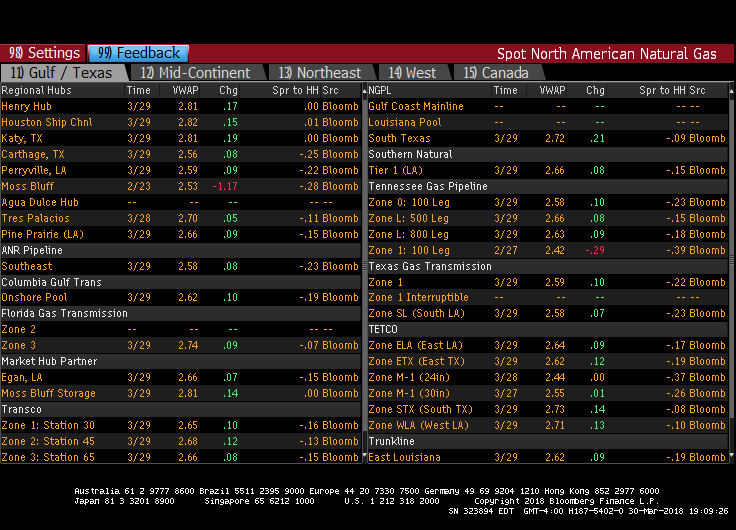 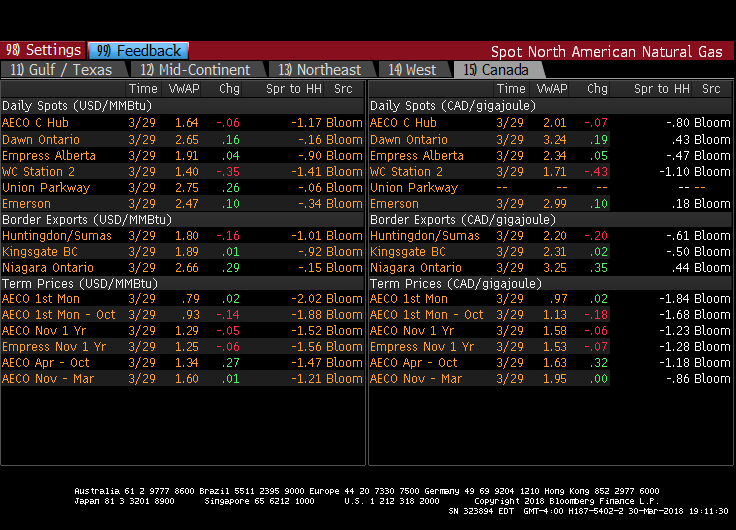 These screencaps are from the Bloomberg function BGAS <GO>

Henry Hub is used as the North American benchmark for natural gas. As such, all other distribution hubs are quoted with a basis differential to Henry hub as shown in exhibits 1 and 2.

As shown in exhibit 2, some Canadian Distribution hubs sell at a premium and some sell at a discount relative to Henry Hub. The basis differential also accounts for transportation cost. As an extreme example to transport natural gas overseas, it has to be liquefied into liquid natural gas (LNG), then transported, and then regasified. All this needs to be accounted for in the difference in price.

What is Natural Gas and LNG

Natural gas (“natty”) is a gaseous fossil fuel consisting primarily of methane. Natural gas is formed when layers of decomposing plant and animal matter are exposed to intense heat and pressure under the surface of the earth over millions of years. Natural gas reserves are more evenly distributed around the globe than oil reserves.

Natural gas burns cleaner than any other fossil fuels due to the relatively less complex chemical structure.

Liquid natural gas (LNG) is natural gas that has been cooled to minus 260 degrees Fahrenheit. At that point, the gas condenses to liquid and becomes a much more cost-effective fuel for transportation over long distances. LNG is odorless, colorless, non-corrosive, and non-toxic. Therefore, LNG will not pollute land or water resources. LNG is converted back to natural gas by pumping fluids from the storage tank and heating it to degasify the liquid. The gas is then ready for delivery through pipelines to end users.

The key factors affecting the North American price of natural gas (as a proxy, NYMEX Henry Hub) are: availability of North American supply relative to demand, global supply and demand for LNG, the strength of economy, and availability of pipelines to move gas to meet changing demand. For the most part, natural gas and associated securities are priced at or between hub prices. The cornerstone of gas pricing is Henry Hub.

Natural gas is used extensively in residential and commercial power generation applications such as space heating, water heating, crop drying, and cooking. Natural gas is also used by the oil and gas industry itself. Producers of natural gas will use it as fuel in processing facilities while pipeline companies use it to fuel compressors to push natural gas along the pipeline.

Natural gas inventory can be stored underground in three types of storage reservoirs: depleted reservoirs, aquifers, and salt cavern formations. Most of the active underground storage facilities in the US are in depleted reservoirs due to their abundance, lower capital conversion costs, and the tendency to be located close to market regions. Owners of storage facilities may not be the owners of natural gas held as most gas in storage is held for the long-term to capture a positive price spread.

Canada is the world’s fifth largest producer of natural gas and accounts for five percent of global production.

Natural gas production is predominately in Western Canada (BC, AB, and SK) with a smaller portion produced in ON, NB, and NV.

Canadian natural gas supply currently exceeds domestic consumption, a function of Canada’s abundant resources and low population density. Canadian and US natural gas markets are heavily integrated as Canada exports its surplus to the US while importing smaller amounts into Central Canada.

Upstream oil and gas companies are involved in raw material extraction or production. They identify oil and natural gas deposits and engage in the extraction of these resources from underground. These companies are called exploration and production companies.

Downstream gas companies are closer to the end users of gas. These companies include Local Distribution Companies and Utilities, whether the gas is used for heating or electricity. Marketing services help move finished products from energy companies to retailers or end users.

James
James is a third-year finance student at the UBC Sauder School of Business. He is currently a Director on the National Investment Banking Competition Organizing Team. Outside of school, he is studying for his CFA Level I and enjoys playing basketball, working out, and travelling in his spare time.
https://www.linkedin.com/in/huang-james/